MASTIFF is a hardcore band hailing from the East Bay, California. Established in late 2012 by ex members of On a Warpath, Lose None and These Days, MASTIFF was born. With the release of their first EP, Trap City, MASTIFF broke ground with a unique blend of urban hip-hop, heavy beatdown breaks and a broad range of lyrics that range from the topics of politics, anxiety, to the struggle of the ghetto.

Being at a MASTIFF show can be a riveting, positive experience or one of the most painful nights of your life. The energy that the band puts out keeps you going and wanting more. From playing 50+ shows, touring the West Coast and sharing the stage with hard acts like Lionheart, Hoods, Downpresser, Suffokate and many more, MASTIFF has been considered one of Northern California’s top hardcore bands.
MASTIFF will be releasing “Strength In Despair” with Knives Out Records from Paris, France.
In the meantime, keep flooding your ears with the hate filled, heavy drivin’ groove monster that is MASTIFF. 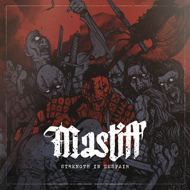