BACK DOWN, Bristol UK Hardcore

BACK DOWN is a Hardcore punk act from Bristol UK. Formed in late 2013 from friends in former Bristol bands, the intention was to create powerful, energetic DIY hardcore… and have a good time doing it. The first self-titled 2 track demo was recorded in August, and gained recognition through appearances all over the UK with artists like BIOHAZARD, BUN DEM OUT, COLD HARD TRUTH.

After the first Belgian and Netherland dates with former UKHC act Dogfight, BACK DOWN recorded highly regarded 5 track EP ‘Against All Odds’ with Oz Craggs at Hidden Track Studios (Pay No Respect, Feed The Rhino). Since its release in March, they have toured Europe with UKHC act Cast Iron Jaw, travelled as far as Poland for shows, released 2 videos and have made countless appearances across the UK with artists across the board.

Ready for 2015 with brand new and improved material, BACK DOWN are set to build on their growing reputation as one of UKHC’s strongest exports. 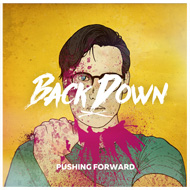