ZERO EIGHT ONE is an italian positive hardcore band. The band formed in 2012 in Naples, southern Italy area, and the original line-up consisted of vocalist Vincenzo, guitarist Gabriele, bassist Enzo, drummer Paolo (ex singer in Onfall). After some line-up changes Paolo replaced Vincenzo on vocals, Daniele replaced Paolo on drum and Bosco joined in the band as second guitar player.
After some shows Gabriele left the band and Luca (ex Onfall)replaced him.
The group is mostly influenced by Orange county hardcore bands but also early NY youth crew style. They consider themselves a mix between Bane, Battery, Uniform Choice, Chain of Strength and Ensign, with melodic voice, and of course cruelty free and positive culture.
Paolo, the singer is involved into veganism diet and strongly support all kinds of militance and politic actions against animal suffering. Veganism is a lifestyle !!!!
ZERO EIGHT ONE signed for Irish voodoo recording from Califonia and put out a digpack/cd called “something to say”.
The cd is selling via Revhq(exclusive distro in Usa), Core Tex rec (in Europe) and Retribution Network (in Japan).
In April something to say cd is consider top album of the week on Core Tex rec.
Again ZERO EIGHT ONE produced their first official video called “Still the same” and in less then 3 weeks has been viewed by almost 5.000 hardcore kids. 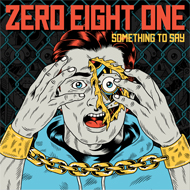 ZERO EIGHT ONE
“Something To Say”
(Vinyl / CS / Digital)