Picture Vietnam, the country: war-torn, savage and bloody in the eyes of the world. A picture of instability, restlessness and battle, embroiled in decades of long disputed violence. A kill-or-be-killed environment where only the strong survive!

Now step into the world of VIETNOM, the band: A DMS outfit from the mean streets of New York City, and coming up with the likes of such DMS giants as Agnostic Front, Madball, Skarhead and Son Of Skam! These DMS fellas are coming with a no-holds-barred, “Strictly The Real” hip hop metal flavor that’s straight-up in your face and there’s nothing that you can do about it! VIETNOM is out to take the respect they so rightfully deserve in the hardcore scene!

VIETNOM isn’t named so much for the Asian country as it is for one of the band’s two front men, NOM-ONE, ex-graffiti bomber from Corona, Queens, who left his mark on the streets in more ways than one. With a knack for always being in rare form and a voice capable of pulverizing concrete, making his presence known is never a problem! The other man on point, Scorsese, the under boss of the crew, who’s actions speak louder then words, is undoubtedly gifted with a tight flow and a talent for wordplay. He combines the influences of hip hop, hardcore and knowledge of the streets to deliver that DMS wild-style lifestyle to his lyrics. Flanked by his partners in crime is the infamous Joe Krazy (who shares vocal duties) also known to drop an ill rhyme or drop you with a quick right-hand, you’re going to feel him, regardless! No one will dispute the fact that this ill team from Queens, uses their talents solely for the Dirty Money Squadron! AK-Ray-47 was already a local hero as guitar shredder for Florida’s own Tension, perhaps South Florida’s most potent hardcore band until their demise in the early 90’s. Ray also gained notoriety in Pressure, a politically-charged melodic punk band featuring ex-members of Bad Brains, Underdog and Vegan Reich. So in 1999 when Ray asked NOM and Scorsese to start a band, VIETNOM was born. The trio quickly recruited Rob Polak, who’s quick to beat you down with a guitar riff. Alan Merrick, bringing the hardcore funk on bass, and Ralph Mele who wreckes the skins like they owed him money! VIETNOM also recruited Bronx Bomber on the wheels of steel, DJ COS, who demonstrated mad skills with Skarhead and on Danny Diablo’s “Street CD 2003”.

In 2000, VIETNOM inked up a deal with Uprising Records and released the “Strictly The Real” EP, which was soon followed by their first full-length LP “Death Is The Outcome” in 2002, which features guest appearances by Madball’s Freddy Cricien, Skarhead’s Lord Ezec and Boston Mike (RIP). With their crunchy old-school New York hardcore riffs and hip hop inspired delivery, VIETNOM has quickly earned a reputation both musically and literally as a crew not to be fucked with. Songs such as “Strictly The Real” and “Outcast” chronicle the hardcore lifestyle they know so well.
VIETNOM has already toured the east coast with bands such as Hatebreed, AF, Sworn Enemy, Subzero, God Forbid, Hims and Converge, just to name a few. VIETNOM has been to Europe, highlighted by a great performance in front of thousands at the Dour festival in Belgium.
VIETNOM leads a gangster-thugcore barbarian assault on the worldwide consciousness, no better crew could be assembled to bring you the harshest realities of life on the streets. 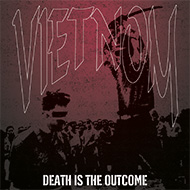