Formed in 2005, PROVIDENCE comes from the depths of filthy PARIS and play dark and brutal hardcore, full of crushing breakdowns. Since their beginning the band sought to innovate rather than imitate, intending to create a combination of social/political awareness and aggression. Feeling that hardcore had strayed from its roots and DIY ethic into subgenres like emo and chaotic metal, a good, basic, heavy sound is their aim.

PROVIDENCE’s style is huge, metallic and epic, yet manages to be efficient and straight up at the same time. A low and thick dual guitar sound is underpinned by intense double-bass drumming, mostly switching between mid-tempo and punishing breakdowns but occasionally breaking into full-on bursts of hardcore speed. The hoarse-growled vocals that complete this already potent formula are complimented by monstrous gang backups, spitting out venom on a variety of topics including politics, economy and the craziness of the world, yet maintaining a poetic turn of phrase.

PROVIDENCE ’s violent and energetic live shows, to-the-point music and thought provoking, bleak, reflective lyrics never fail to impress live audiences. With the quintet always eager to hit the road, their fanbase is constantly expanding outside of their city and country, forging a blazing path of hardcore force and brutality that France hasn’t produced in quite some time.
PROVIDENCE have shared spots in France, USA, Asia, Brasil, Russia, Scandinavia and across Europe with such notable heavyweights as Cro-Mags, Strife, Agnostic Front, 100 Demons, Madball, Terror, Bulldoze, Cruel Hand, Nueva Etica, Vision Of Disorder, Born From Pain, E-Town Concrete, 25 Ta Life among others.

In 2013, PROVIDENCE got signed by US’ records label EULOGY RECORDINGS for their first full length CD. 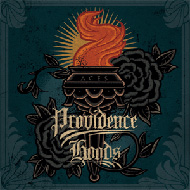