KING OF CLUBZ is a hardcore band hailing from the Quad Cities: Rock Island, Illinois. With a tenure of over 12 years in the game; blood, sweat and tears has continued to pay off for these Midwest juggernauts.

In 2002, KING OF CLUBZ was Born out of the ashes and dismemberment of several Midwest hardcore bands. KOC today stands tall with the original line up comprised of John Music (xTyrantx), Thomas Behne, Ryan Levsen and Bobby VaLeu (Walls Of Jericho, Close Your Eyes).

In 2002 five friends came together one afternoon in an upstairs, rental bedroom with one goal: to write heavy, pissed off music. KING OF CLUBZ immediately garnered huge attraction and attention not only in their home scene of the Quad Cities, but very quickly throughout the Midwest; from Chicago, to Minneapolis, to Denver, Colorado – KOC was carving out a loyal fan base.

In 2003, KING OF CLUBZ released “The Day You Die”, a demo recorded by Mike Hasty of Walls Of Jericho, Detroit. Well received, this album was re-mastered and re-released that same year by Filled With Hate Records out of Germany.

2006 to 2012 were six difficult yet incredible years for KOC. Three additional full lengths, a 7” split with Providence and a Goodlife Records compilation went hand in hand with several European & US tours and what seemed like a rotating door of temporary members.

After almost 18 months on hiatus and basically viewed as “dead in the water”, in April of 2013, KING OF CLUBZ was invited to play a QCHC tribute festival. All original members reunited and spent months reworking old tracks and writing new ones in preparation. After the fest ended and the lights went down, a fire had been reignited: KING OF CLUBZ was reborn.

Fast forward to present day, and swinging harder than ever before, the all-star original line-up is poised to release what will surely be their most intense and powerful tracks to date.

KING OF CLUBZ members now reside over the U.S., but still call the Quad Cities home-base. And with a new record label, new merchandise, new tour schedule and a new album almost complete, KOC again has the attention of the hardcore world.

“Our hope in life is us, true to self and dying hard !” 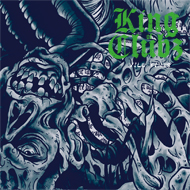